Rose, the Autism West heifer, is up for auction on 8 March 2017, with all proceeds from the sale being donated to Autism West.

We recently sat down to chat with Rose’s owner, Wayne Owston, to find out more about beautiful Rose, as well as why his family is a passionate supporter for autism awareness.

“We have a son (3 ½ year old non-verbal) and a daughter (almost 6, relatively mild) on the spectrum. When we first received our diagnosis in 2015, we had no idea what autism was and had to learn quickly. This is one of the reasons we are doing this, as we believe it’s important to raise awareness about autism, especially within the rural community.”

The Owston’s became involved with Autism West in 2016. Keen to throw their support behind a local organisation working with people on the spectrum, they looked around for the right fit, and after speaking to a number of organisations discovered Autism West. After a meeting with some of the team, they walked away feeling like they had found it, and the rest, as they say, is history!

The Owston’s came up with the concept of fundraising via a breed sale, and thought Rose was the perfect cow for the job. A standout from the minute she was born, ’Black Rose’ is an awarded dairy cow from high-quality heritage, who, as a side note, has a boyfriend who is also “the hottest bull in the world”.

Wayne also believes that this is a unique way to help raise awareness about the Western Australian dairy industry, which has been doing it tough;

“I think it’s important for people to know that we’re not butchers. Cows are our life! We work hard and really care about our animals, so much so that when we got married our Maid of honour was a cow, and a bull was my Best Man!”

Which is why the Owston’s are offering Rose a forever home on their small dairy farm near Whitby falls;

“If anyone is feeling generous and wants to buy Rose, but doesn’t have the room in suburbia to house the lovely young girl, we are willing to give her a forever home with you being the owners.”

For those not familiar in what is involved in a breed sale, on the day, 28 bulls and 7 females will be up for sale.

‘Black Rose’ is Lot 1 in the sale, which will be live streamed on the Autism West Facebook page from approximately 12pm onwards on 8 March 2017. You’ll also be able to catch Alison Davis, CEO Autism West, talk a bit about Autism West from 10.50am approx.

“We’d like to thank Alison Davis, the CEO of Autism West, for all of her hard work. She has been great through this whole journey. We’d also like to thank the Autism Community for their support in raising awareness in the rural community.”

Autism West is incredibly grateful to the Owston family for their generous support.

To find out more about the breed sale, you can contact:

Where: Boyanup Saleyard, 15km east of Bunbury, right in the heart of dairy country

All proceeds from the auction will be donated to Autism West. 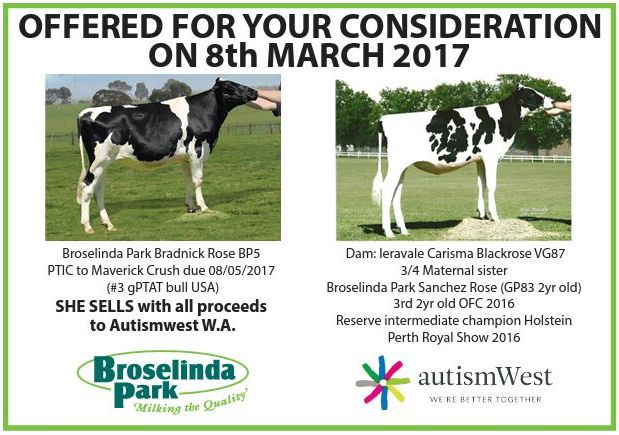